From the very beginning, the use of artificial joint replacements has been accompanied by greater or lesser problems of wear or even spontaneous degradation of materials from which the endoprostheses are made.  Nowadays, polyethylene disease is well known as is ARMD (Adverse Reaction to Metal Debris) arising around MoM (metal-on-metal) type endoprostheses.  Metal wear is problematic because it releases toxic chromium and cobalt ions into the body. 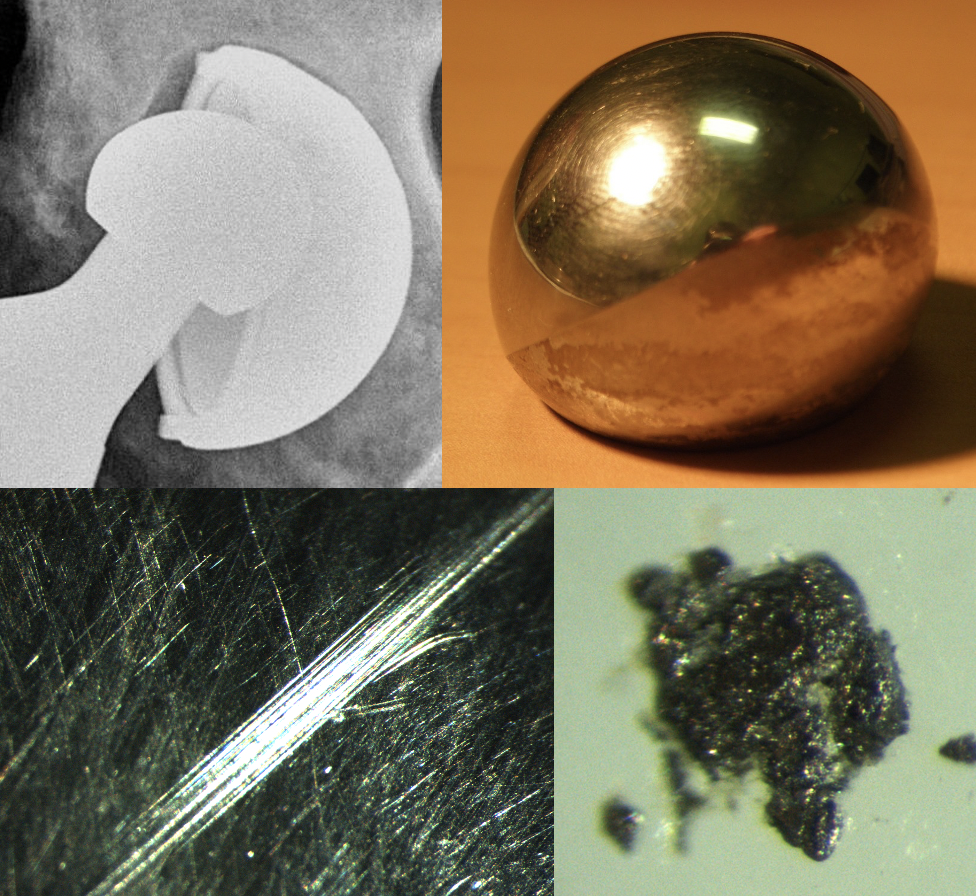 The above images represent a failed acetabular component with damage to the femoral head including scratches on the surface and micro-debris.

Metal wear can occur for reasons other than just MoM wear.  It has to do with which materials are harder than cobalt-chromium alloy.  The main one is ceramics.  Next is titanium which is roughly the same on the hardness scale as Co-Cr (cobalt-chromium alloy).  Are you aware of the effect of different types of bone cement?  Methyl methacrylate is a relatively soft substance itself, but it usually contains radiopaque additives.  Due to the additives used, we classify cements as “soft” or “hard”.  Cement producers use either barium sulphate (softer than steel and CoCr) or zirconium, which is harder than them.  Incidentally, bone minerals such as tricalcium phosphate and hydroxyapatite) are slightly softer than Co-Cr.

In recent years we have learned to not use Co-Cr heads in hip revision operations that were required by destruction of a ceramic articulating component.  Even small amounts of ceramic particles embedded in the socket can cause a metal head to rapidly abrade.  In my experience, the same problem can occur as a result of the presence of particles from “hard” bone cement and titanium resulting from surgery on the other components.  Therefore, I recommend using revision ceramic heads with titanium sleeves (taper adaptor) for all revision procedures.  The only exception is when I am sure of the composition of the bone cement used in the primary operation and the material from which the previously used components were made.

Dr. Hach practiced for 15 years with the professors who began joint replacement in the Czech Republic in the 1960s and 1970s where he taught medical students as an assistant professor.  Currently he is Chair of the Orthopedic Department in Melnik, Czech Republic.  In addition, since 2002 he has been the Implant Database Manager on the team that manages the National Registry of Joint Replacement.

Carter has been playing lacrosse since the 3rd grade. Now a sophomore in the Baltimore area, Carter has plans to play in college. His ultimate goal, held since 4th grade, is to become class president and captain of the lacrosse team at Princeton University.

Just days before a major college lacrosse recruiting tournament, however, Carter broke the growth plate in his right arm in a school football game. He was directed to a local orthopaedic practice, and had his arm cast in a traditional, cotton padded cast. The doctor and cast technologist mentioned that if he tried to play lacrosse that weekend, it would be painful and the cast would end up becoming soaked in sweat, resulting in discomfort and a rather unpleasant odor. They also told Carter if he got it wet he would have to be recasted. More time. More costs.

That weekend Carter watched his teammates play tough – from the sidelines – while coaches from Johns Hopkins, North Carolina, Virginia and Princeton, among others, scribbled notes on their next wave of talent.

His competitive juices flowing, Carter wanted to get back on the field at the next tournament, held the weekend prior to Thanksgiving. A friend told Carter’s father, about a waterproof, breathable cast liner made by AquaCast, which allows patients to perform activities without worrying about keeping their cast dry. The father, a former college All-American lacrosse player, contacted Towson Orthopaedic Associates and Scott Tarantino, MD. They stocked the AquaCast Liner and Carter had his arm wrapped in the waterproof product, quickly becoming a fan.

“It’s been really great. I get sweaty, come home and shower, wash it out and it’s dry really quick. It doesn’t smell like the other one. And it doesn’t itch.” Carter played in the following tournament, amassing 5 goals and 8 assists in three games, drawing the attention of several scouts, including Princeton. “I’m glad Dr. Tarantino’s practice had AquaCast,” noted Craig’s father. “We certainly didn’t know it was available. It made a big difference for Carter – it’s made life a lot easier.”

In addition to playing in the lacrosse tournament, Carter was able to finish his football season in comfort. “Two other guys on the team broke their arms and I told them about Dr. Tarantino’s office and the AquaCast. They showed up at the next practice with the AquaCasts.”

As a side note, Carter has seen his dream of attending Princeton come true, formally committing to the Tigers and head coach Chris Bates. We at AquaCast wish Carter and his family the best of luck this season and in the future at Princeton.

OrthopaedicLIST.com will make a contribution to the Orthopaedic Research and Education Foundation in honor of the submitter for each new addition to
Implant Identification. Please help our colleagues identify unknowns.

Disclosure: Manufacturers and suppliers are invited to pay nominal fees to upgrade their product listings, making them more useful and prominent.
OrthopaedicLIST.com reserves the right to provide this benefit to appropriate medical and other service organizations at no cost.